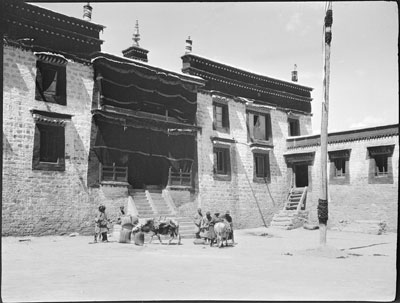 Nyening Monastery near Gyantse. A. J. Hopkinson visited there in June 26th 1927 with a French traveller called Mlle Lafugie, when they went to see Dorje Pamo, the highest incarnate woman lama in Tibet. Her main monastery was at Samding, but she was at this time resident in Nyening. The photograph shows the main entrance to the monastery, with two oxen outside being loaded with goods. A large prayer pole can be seen in the right of the image