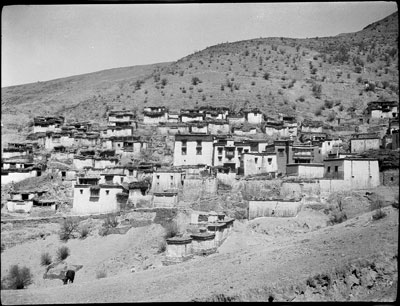 A view of Nyangto Kyipuk Hermitage, 12 miles from Gyantse on the road to Shigatse

Notes on print/mount - One contact print made from this negative is contained in A. J. Hopkinson's negative case with the negative. The print was made using Velox paper. The caption "Gyantse Monastery 1927-28' has been written on the back of the print in pencil, as has the name 'A. J. Hopkinson' and the reference 'D-38'. All three inscriptions seem to have been made on different occasions [MS 15/07/2006]