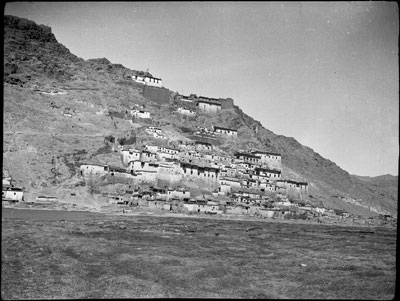 Other Information - Dates: Hopkinson mentions visiting Tsechen on July 7th, when he accompanied a French traveller called Mlle Lafugie [A. J. Hopkinson Archive, OIOC British Library, Mss Eur D998/54, Journal Letters from Gyantse and Various Camps, 1927-28, commencing July 5th 1927, Gyantse, page 3]. he also states that he went there in February 1928 as part of a duck-shooting trip. However, as most of the images in the 'D' Album of negatives seem to have been taken in the second half of 1927, especially around July, this has been suggested as the most likely date for the taking of this image [MS 15/07/2006]