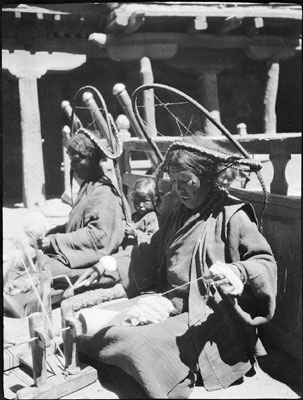 Two women spinning wool with spinning wheels for the local carpet industry in Gobshi, four miles from Gyantse. They wear the large, hooped head-dresses typical of this region of Tibet and a small child sits behind the woman on the left of the image [the courtyard and general scene in which the woman are seated can be seen in BMH.D.34.1]. Hopkinson visited Gobshi on a number of occasions [see Notes]. Gobshi was about 4 miles from Gyantse and was well known for its carpet industry, which Hopkinson was interested in photographing.