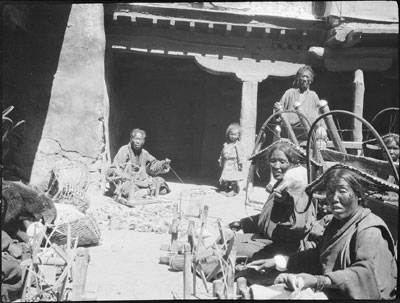 A group of people, men and women, seated outside in a courtyard with spinning wheels preparing wool to be used in the local carpet industry. Two women wearing very large Gyantse-region hooped head-dresses are seated in the lower right of the image [a closer view of these women can be seen in BMH.D.35.1]. Open weave baskets full of wool can be seen in the left of the frame. Hopkinson visited Gobshi on a number of occasions [see Notes]. Gobshi was about 4 miles from Gyantse and was well known for its carpet industry, which Hopkinson was interested in photographing.

In Negative - An inscription has been made on the left edge of the negative in blue-black ink (probably the reference number D.34), but this has been cut in half as the film strip was divided into individual frames [MS 15/07/2006]

Notes on print/mount - Two contact prints made from this negative are contained in A. J. Hopkinson's negative case with the negative. On one print the caption "Spinning wool (Gobshi) for carpets - The wool industry Wool is Tibet's chief export" has been written on the back in pencil, as have the references 'D.34', '298[?]' and ' H6 '. The second print bears the name 'A. J. Hopkinson' and the references 'D.34' and 'H6', all handwritten in pencil [MS 15/07/2006]