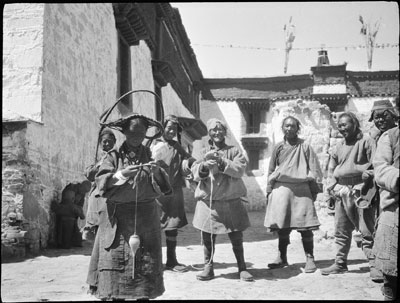 Hopkinson visited Gobshi on a number of occasions [see Notes]. Gobshi was about 4 miles from Gyantse and was well known for its carpet industry, which Hopkinson was interested in photographing. In this image, a small crowd of people have been photographed in the compound of the temple. The woman on the left is spinning wool and a man in the centre is holding a ball of spun wool.