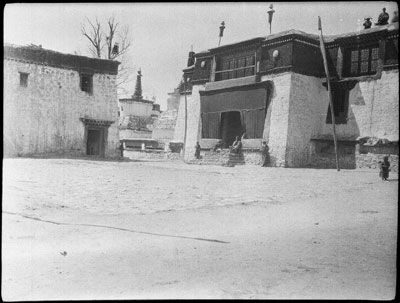 Hopkinson visited Gobshi on a number of occasions [see Notes]. Gobshi was about 4 miles from Gyantse and was well known for its carpet industry, which Hopkinson was interested in photographing. In this image, the entrance to the main temple can be seen, with a number of people watching the photographer in the courtyard. A small chorten can be seen in the background

Notes on print/mount - One contact print made from this negative is contained in A. J. Hopkinson's negative case with the negative. The caption 'Gobshi - near Gyantse' has been written on the back of the print in pencil, as has the name 'A. J. Hopkinson' and the two references 'D 32' and 'H 6' [MS 15/07/2006]