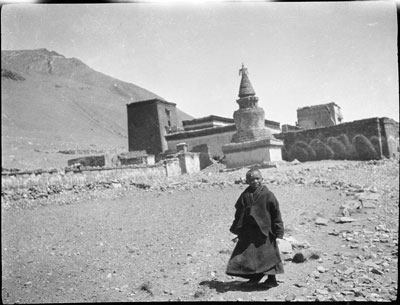 A young monk outside Shanang Monastery near Samada, which, according to A. J. Hopkinson, had been left empty since the Younghusband Expedition of 1904 [see Notes]. He visited the monastery on July 19th en route from Gyantse to Yatung

Notes on print/mount - One contact print made from this negative is contained in A. J. Hopkinson's negative case with the negative. The caption "A typical monastery near Samada with a small occupant in front [Degu]" has been written on the back in pencil [MS 14/07/2006]