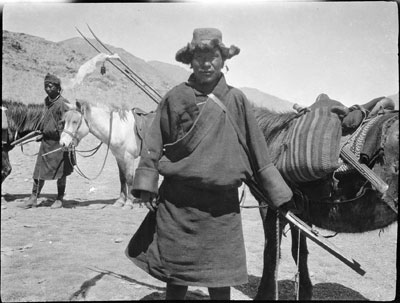 In his journal for March 29th 1927, while en route from Khangmar to Kala via Samada, A. J. Hopkinson commented that he encountered a gentleman carrying an old prong gun and a Tibetan sword. This image is of that man, seen here with the prong gun strapped over his back. Horses are seen in the background, with the sword in its sheath attached to the horse's saddle