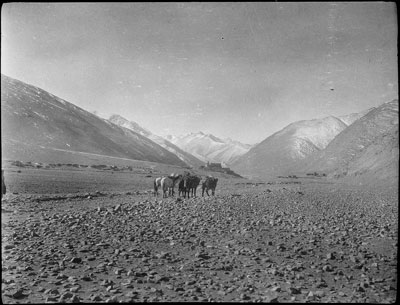 A group of horses in an open, rocky plain with mountains rising steeply in the distance. Taken close to Samada when Hopkinson was travelling to Yatung from Gyantse in July 1927. The building is Shanang Monastery. Hopkinson comments in his journal for 19th July 1927 that he tried to take some photographs of the monastery interior but that, unfortunately, his camera stand fell over. From this point he seems to have been concerned about the impact the damage may have on his image-taking

Notes on print/mount - One contact print made from this negative is contained in A. J. Hopkinson's negative case with the negative. The caption "Shonang Monastery near Samada - Another typical view on the road to Gyantse. The [?] valley is occupied only by a few scattered houses and a monastery" has been written on the back of the print in pencil, as has the name "A. J. Hopkinson" and the references 'C98' and 'H6' [MS 14/07/2006]