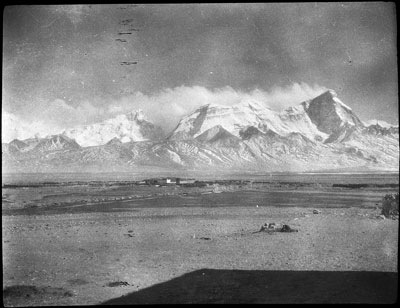 Notes on print/mount - One contact print made from this negative is contained in A. J. Hopkinson's negative case with the negative. The caption 'Chomolhari 23,930 feet high' has been written on the back of the print in pencil, as has the reference 'C.92'. Technical information 'F 22 14 sec C. F' was also written on the back but has subsequently been struck through [MS 13/07/2006]

Other Information - Description: [Extract from taped interview, Richard Blurton and Mrs Hopkinson] 'The Chomolhari with a rest house' [MS 13/07/2006]

Other Information - Dates: Hopkinson left Gyantse on July 17th 1927 to travel back to Yatung. The photographs in this negative album wallet seem on the whole to have been taken chronologically between March and July 1927, suggesting that this photograph was taken en route to Yatung. For dating of image, see A. J. Hopkinson Archive, OIOC British Library, Mss Eur D998/54, Journal Letters from Gyantse and Various Camps, 1927-28, commencing July 19th 1927, Camp Samada, page 5 [MS 13/07/2006]