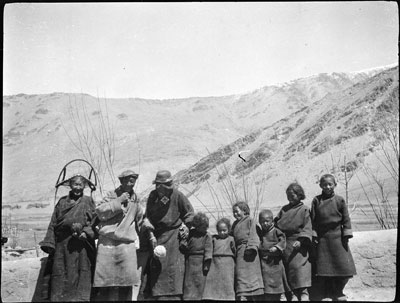 A group of Tibetan people, men, women and children, having their photographs taken near Saugang, just outside Gyantse on the route taken by Hopkinson to Yatung. The group is laughing. The woman on the extreme left and the person third from the left are both holding balls of wool

Other Information - Description: [Extract from taped interview, Richard Blurton and Mrs Hopkinson] 'Group of villagers. Two are holding wool, one white and one brown. They spun a much coarser wool. My husband noted one of the shepherds he met on the way between Shigatse and Gyantse was stitching into the sole of a shoe with a very coarse twist of wool' [MS 13/07/2006]