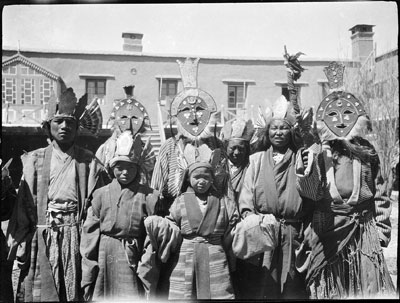 A close-up of the group of dancers/actors who performed at Gyantse Fort. In this image their costumes, including head-gear and masks can be seen very clearly.

Other Information - Description: [Extract from taped interview, Richard Blurton and Mrs Hopkinson] 'The players were hereditary, I think they were almost a caste, because they transmitted it by word of mouth. They performed traditional legends and dances; some of it was chanted, some of it was a sort of performance that seemed to be an actual ceremony of some kind. and then one of them would take it up and chant a whole length, and then there would be a poor song, with comic interludes. I think they must have been gathering up for the arrow shoot. I think it must mean something like speakers of the gods, it'll have that implication, they're the old legends of PadmaSambovar etc. I think it may say in my husband's letters that they chanted in an archaic dialect. The head-dresses may have originated in Indian tantric tradition' [MS 13/07/2006]