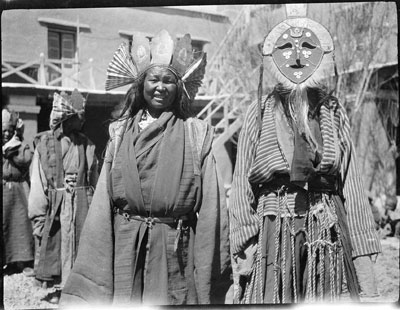 A close-up of two dancers/actors who performed at Gyantse Fort. In this image their costumes, including head-gear and masks can be seen very clearly. Other dancers can be seen in the background

In Negative - 'C-86' has been written down the right edge of the negative in black or blue-black ink. Both side edges of the negative have been cut very crudely [MS 13/07/2006]

Notes on print/mount - Two contact prints made from this negative are contained in A. J. Hopkinson's negative case with the negative. The prints were made using Velox paper. One bears the inscription 'A. J. Hopkinson' and both have the reference 'C 86'. All annotations have been written on the back of the prints in pencil [MS 13/07/2006]

Other Information - Description: [Extract from taped interview, Richard Blurton and Mrs Hopkinson] 'Ache Lhamos - the traditional players who performed old legends. They're mentioned in that book. The wandering playerss - the legends and myths of old Tibet (see David Neel). These people came to the fort to perform. We encountered them by accident in the countryside on our way to Shigatse [Recording has Mrs Hopkinson's memories of David-Neel]. One of the women has a wonderful gow [ gau ], an amulet box. She's also wearing a chatelain around her waist, that would have held a pouch holding flint and steel' [MS 13/07/2006]

Contemporary Publication - This photograph was published in 'The Sphere' magazine for September 29th 1928. It had the caption: "Strolling players of the roof of the world: Despite their costumes, which suggest rather the tomahawk-bearing Redskins of Fenimore Cooper's tales, these two are harmless vagrants of Tibet, roaming from place to place in search of a precarious livelihood. They cover an immense quantity of ground in their travels. They are known as "A-chhe Hla-mo" - the first word of which signifies 'Big Brothers', while the term 'Hla' means 'God'. Dancing plays a great part in their shows, but their terpsichorean sports should not be confused with the so-called 'Devel-Dances' of the priests, which have a religious - and sometimes shamanistic or diabolical significance" [MS 24/08/2006]