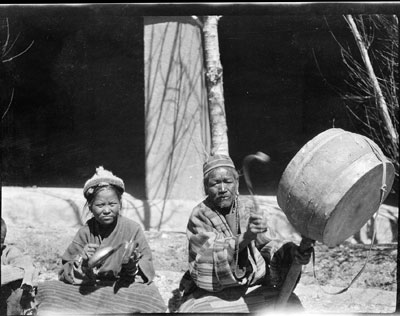 Two musicians who supported the masked dancers who performed at Gyantse Fort [see BMH.C.82.1 - 84.1 for related images]. The young girl is playing the cymbals and the more elderly man is playing a large drum

In Negative - The negative has been cut quite crudely down both right and left edges, but especially down the right hand side [MS 13/07/2006]

Other Information - Description: [Extract from taped interview, Richard Blurton and Mrs Hopkinson] 'Musicians for Ache Lhamos dance at fort, showing cymbal and drum, as in monastic chanting marked to give pause or to give emphasis. But they weren't going the whole time. The drum was the main instrument. Same in lama dances' [MS 13/07/2006]