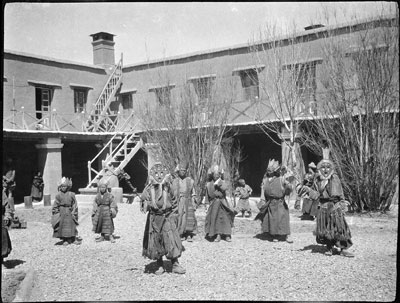 In Negative - 'C-83' has been written in blue-black ink down the right edge of the negative. The negative has been cut very crudely down the left edge [MS 13/07/2006]

Notes on print/mount - Two contact prints made from this negative are contained in A. J. Hopkinson's negative case with the negative. One of the prints bears the caption " 'Ache-Lhamos' - Popular strolling players - They even visit Darjeeling" along with the references 'C 83' and 'H 6'. The other bears the same number references and the caption 'Aji Hlamo'. All inscriptions have been written on the back of the prints in pencil [MS 13/07/2006]