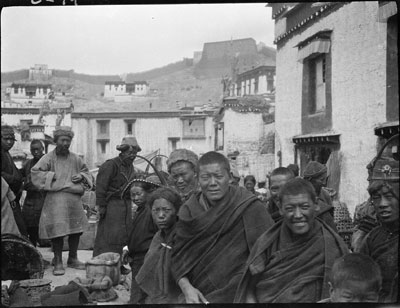 A group of people in Gyantse bazaar. Traders can be seen lined up against a wall with their goods displayed on cloths on the ground. The walls of Gyantse monastery and many of its buildings can be seen in the background. The large wall over which a large tapestry would be displayed is seen on the hillside in the top right corner of the image. The crowd of people closest to the cameraman include a number of monks

Notes on print/mount - Two contact prints made from this negative are contained in A. J. Hopkinson's negative case with the negative. The back of one of the prints bears the caption "Typical bazar crowd at Gyantse - monks in foreground' and the references 'C 79' and 'H6'. The other bears the same caption as well as additional inscriptions including that of 'A. J. Hopkinson' [MS 13/07/2006]

Other Information - Description: [Extract from taped interview, Richard Blurton and Mrs Hopkinson] 'In the foreground are two monks and women behind with the Gyantse head-dress, and the Kigo wall right in the background' [MS 13/07/2006]