A bridge in the Chumbi Valley 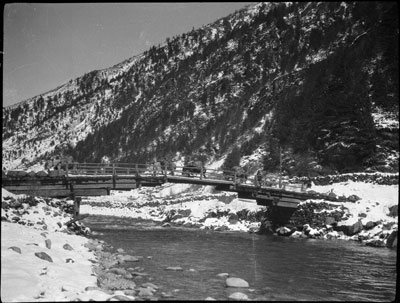 A bridge in the Chumbi Valley with a group of pack animals crossing. There is a light fall of snow on the adjacent hillside and along the banks of the river. A telegraph pole can be seen at the far end of the bridge on the right hand side of the image

Notes on print/mount - One contact print made from this negative is contained in A. J. Hopkinson's negative case with the negative. The caption "In Chumbi Valley A typical bridge" and the reference 'C 75' have been written on the back of the print in pencil [MS 13/07/2006]