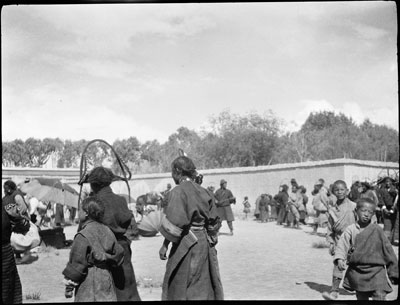 A crowd of people attending the annual Gun and Arrow Competition at Gyantse in 1927. The site of the competition was close to the Paper Factory, about ten minutes from the Fort where the Agency staff stayed. Two women wearing head-dresses are photographed walking away from the camera, thus revealing what the large, hooped, Gyantse-region head-dresses looked like from behind and how they were attached to the hair. Hopkinson commented in his journal for this day that he was fascinated by the crowd and took many photographs of the people he encountered [see Notes].