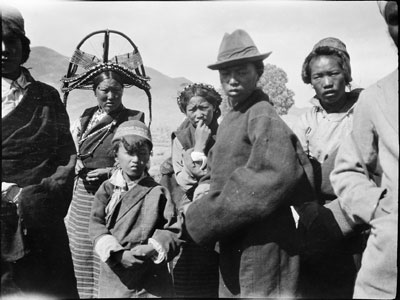 A crowd of people probably attending the annual Gun and Arrow Competition at Gyantse in 1927. The site of the competition was close to the Paper Factory, about ten minutes from the Fort where the Agency staff stayed. Hopkinson commented in his journal for this day that he was fascinated by the crowd and took many photographs of the people he encountered [see Notes]. Mrs Hopkinson comments [see Notes] that the head-dresses worn by the women in the centre and centre left of this photograph reflect ongoing changes in women's fashion. By the late 1940s, the simple ornamented band worn by the young woman in the centre had apparently become preferable to the large hooped head-dresses that earlier characterised women's headgear in the Gyantse region

Other Information - Description: [Extract from taped interview, Richard Blurton and Mrs Hopkinson] 'There's a woman in all her finery on her head-dress and her necklaces, and the young girl [before] her is wearing the kind of headdress that was common when I went up to Tibet in 1947-8. They had given up the hoop shaped headdress, and the women were wearing a band with their coral and turquoise, the one that shows at the bottom of the hooped headdress was worn around their heads like a diadem. This I think for travel and sheer fashion had changed it - it was very cumbersome. These would be bands of seed pearls and coral and turquoise. I don't think I ever saw amber on a headdress, but if they had amber they probably would have worn it there, or it would have been on the necklace in lumps. They all had gows [ gau] ' [MS 13/07/2006]