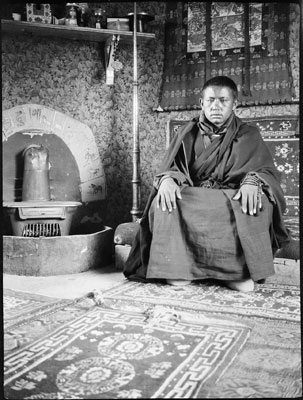 The Doctor of Dorje Pamo, same as in BMH.C.67 but including more of the fireplace. By June 1927 Hopkinson refers to him in his journal as "My Old Friend" although he does not detail on what occasions this relationship developed. Here the Monk Doctor is seen seated in Hopkinson's room in the Fort at Gyantse. A photograph of Hopkinson's wife Eleanor can be seen on the shelf in the upper left of the image. A fireplace can be seen on the left. The room is wallpapered and adorned with a number of Tibetan objects collected by Hopkinson or given to him as gifts