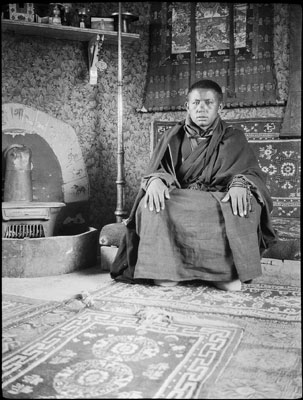 The Doctor of Dorje Pamo. By June 1927 Hopkinson refers to him in his journal as "My Old Friend" although he does not detail on what occasions this relationship developed. Here the Monk Doctor is seen seated in Hopkinson's room in the Fort at Gyantse. A photograph of Hopkinson's wife Eleanor can be seen on the shelf in the upper left of the image. A fireplace can be seen on the left. The room is wallpapered and adorned with a number of Tibetan objects collected by Hopkinson or given to him as gifts

Other Information - Description: [Extract from taped interview, Richard Blurton and Mrs Hopkinson] 'The Dorje Pamo's doctor, taken in my husband's room, at the fort. Wallpaper is imported. I think I still have the butter lamps but I think I sold the charm box. That is a sort of offering tray. Behind this chap is a [thangka of] Mahakala. His long sleeves are red silk - also the scarf with orange, a rosary around his left wrist. Objects around room: l-r on mantlepiece: silver charm box, butter lamp, prayer wheel, hanging female silver ornament, standing copper trumpet, thangka. Fireplace, 1917, with Tibetan animals from wheel of life with crippled man, hawk etc., with a photo of Mrs Hopkinson in the Lake District on the mantle' [MS 03/07/2006]