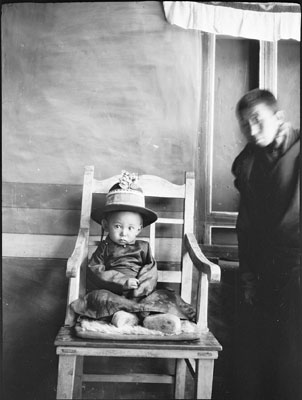 Dorje Pamo's nephew, sitting by himself on a chair but an attendant monk entering the frame from the right (out of focus), photographed at Nyenying Monastery. A. J. Hopkinson visited Dorje Phamo in June 1927 with Mlle Lafugie, a French traveller who stayed for some time in Gyantse and whom Hopkinson assisted.

Other Information - Description: [Extract from taped interview, Richard Blurton and Mrs Hopkinson] 'Dor-je Pamo's nephew with attendant, in the fort judging by the chair' [note: this image was in fact taken in Nyenying Monastery] [MS 03/07/2006]