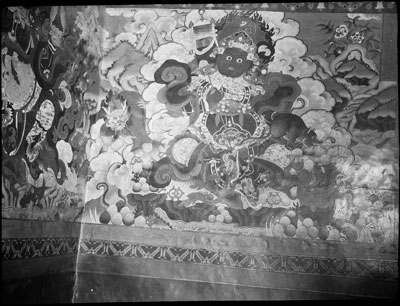 A wall painting in Nyenying monastery, where A. J. Hopkinson visited Dorje Phamo in June 1927

Notes on print/mount - Two contact prints made from this negative are contained in A. J. Hopkinson's negative case with the negative. The first has the caption "Typical wall painting Nye-nying - One of the gods of the "Four Quarters" which decorate the entrance to every temple", along with 'C 62' and 'H6', all written in pencil on the back of the print. The second print has the caption 'Nyenying' and the references 'C62' and 'H6' on the back in pencil [MS 03/07/2006]

Other Information - Description: [Extract from taped interview, Richard Blurton and Mrs Hopkinson] 'A wall painting in a temple near Gyantse, probably Nying-nyang, which is the temple of Dor-je Pamo' [MS 03/07/2006]