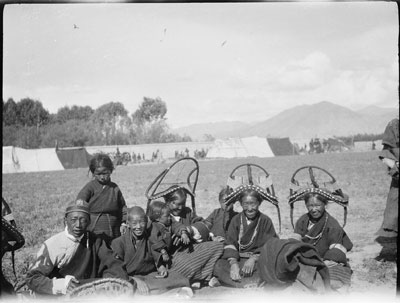 Spectators enjoying a day out at the shooting contest. This photograph was taken on the occasion of the annual Gun and Arrow Competition at Gyantse in 1927. The site of the competition was close to the Paper Factory, about ten minutes from the Fort where the Agency staff stayed. A walled enclosure can be seen in the background, possible the compound of the Paper Factory. Hopkinson commented in his journal for this day that he was fascinated by the crowd and took many photographs of the people he encountered [see Notes]. The women are wearing the distinctive hooped head-dresses of the Gyantse region, and jewellery. The woman in the centre of the image has a large beauty spot on her temple. The man on the left of the image has an insignia on the front of his hat and was apparently associated with the British Fort

Other Information - Description: [Extract from taped interview, Richard Blurton and Mrs Hopkinson] 'Picnic party of the jeprosy (?) [official] from the fort, whose name may be Pat Lin Ju, at the archery contest [MS 03/07/2006]