The Tibetan Trade Agent at Gyantse 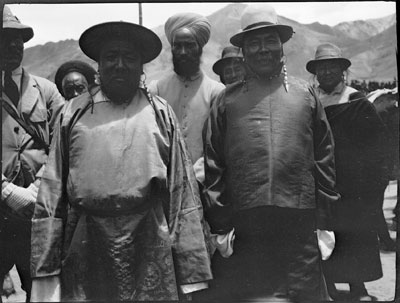 Nishap, the representative of the Khenchung or Tibetan Trade Agent at Gyantse, in the centre left of the image in a flat brimmed hat and silk chuba. Alongside him are two men identified at a later date by Mrs Hopkinson as Sikh Suveda (centre) and Chatra (centre right) [see Notes]. The unidentified European on the extreme left may be Henry Martin, the long term resident of Gyantse/Yatung who was in 1927 working as Head Clerk. This photograph was taken on the occasion of the annual Gun and Arrow Competition at Gyantse. Hopkinson had lunch with Nishap on that day

Other Information - Description: [Extract from taped interview, Richard Blurton and Mrs Hopkinson] 'l-r Nishap, Sikh Suveda, and Chaksa. On the far left is a Brit' [MS 01/07/2006]