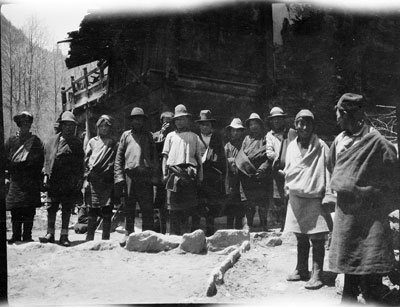 A group of people Hopkinson describes as 'Tromowa' in Rinchengong, the last Tibetan village before crossing the Jelep La into Bhutan. People in this area were well known for having a distinctive dialect. This photograph may have been taken in April 1927 when Hopkinson was on his way back from Gyantse and Yatung to take a Tibetan exam in Darjeeling. A large wooden structure with a raised veranda can be seen in the background