Dean, Wangdu and the Dzongpon of Gyantse 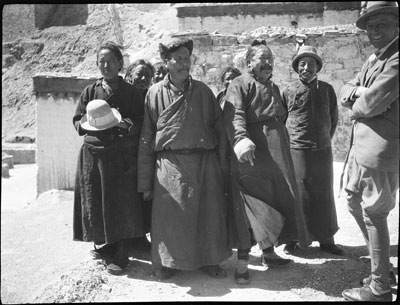 Capt Dean on the far right, Rai Sahib Tsering Wangdi next to him in the brocade waistcoat, fedora hat and with long ear-ring, and the two Dzongpon of Gyantse in the centre of the image. The Dzong can be seen in the background. Hopkinson took this photograph on the afternoon of March 14th 1927 when he went to repay the calls of the two Dzongpon who had visited him previously