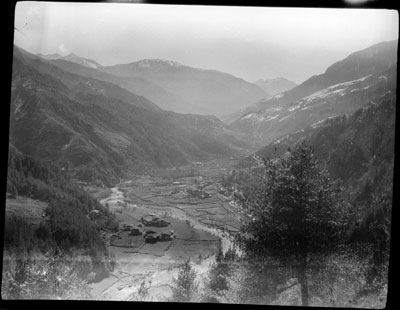 Although Hopkinson states that this image is of Pema, it might also be Rinchengong, the last village in Tibet before entering Bhutan, close to Kargyu [see Notes]. Aerial photograph taken from a hillside overlooking the valley with the small village scattered on both sides of the river which winds through cultivated fields. There is a light fall of snow on the higher hillsides in the distance. This photograph was probably taken in February 1927 when Hopkinson was travelling to Gangtok

Notes on print/mount - One contact print made from this negative is contained in A. J. Hopkinson's negative case with the negative. The print appears to have been removed from an album, as there are traces of black mounting paper around the edges of the print as if it has been taken out after previously being glued in place. A partially decipherable caption has been written on the back in pencil: "near to [?Kargyu]. The mountains beyond are Bhutan. From near Kargyu Febry 8th? 1927". A later annotation of 'Rinchingong near Kargyu' has also been added in pencil. The number 13 has been written on the front top right corner in pencil. [MS 29/06/2006]