Pulling the Agency car at Saugang 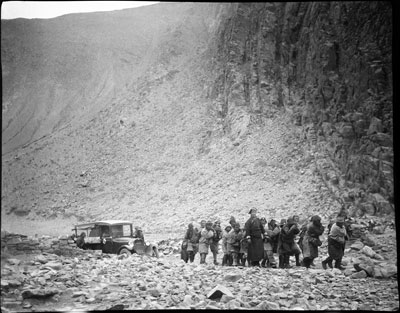 On March 8th 1927 Hopkinson and his aides left Phari by car and travelled to Dochen with much effort [see Notes]. The car had been the idea of the Political Officer Col. F. M. Bailey, who wanted to improve the speed of communications between Gangtok and the various offices of the Trade Agency in Tibet. This image was taken when Hopkinson was en route with the car to Gyantse the following day. Unfortunately, shortly after leaving Dochen the car got a puncture. On March 10th the car had to be physically hauled through the Red Idol Gorge to Saugang because of the dangerous state of the road. After reaching Saugang Hopkinson was then able to travel on the Gyantse, arriving the same day