The Agency car arriving at Dochen 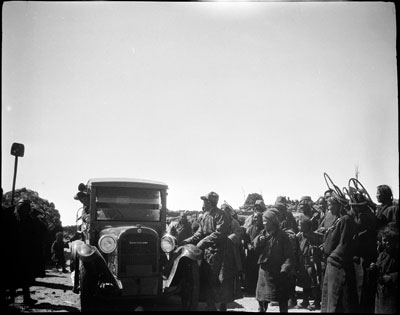 The Political Officer Colonel F. M. Bailey hoped to improve the speed of communications between Gangtok and Gyantse by sending a car to be based in Tibet for the use of the Tibetan Trade Agent and others. The car was maintained in Phari, but Hopkinson makes clear in his journals [see Notes] that it was the source of a great deal of frustration. Here the Dodge car can be seen arriving at Dochen after being manually pushed over much of the Tang La pass earlier in the day

Notes on print/mount - One contact print made from this negative is contained in A. J. Hopkinson's negative case with the negative. The print appears to have been removed from an album, as there are traces of black mounting paper around the edges of the print as if it has been taken out after previously being glued in place. An indecipherable caption has been written on the back in pencil, as has the reference 'H12'. The number 'a4' has been written on the front top right corner in pencil and then erased, along with B33. [MS 29/06/2006]