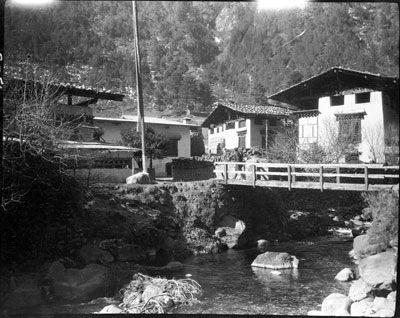 Although Hopkinson states that this image is of Rinchengong, the last village in Tibet before entering Bhutan, it might also be Pema, a village in the Chumbi Valley on the same route as this is stated on the back of the print [see Notes]. Whitewashed houses with the distinctive pitch-roofs found in the Chumbi Valley region can be seen next to a river with a wooden bridge across. Prayer pole in centre foreground. This photograph was probably taken in February 1927 when Hopkinson was travelling to Gangtok

Notes on print/mount - One contact print made from this negative is contained in A. J. Hopkinson's negative case with the negative. A caption has been written on the back in pencil: "H6 - Pema Village - a typical village in the Chumbi Valley". [MS 29/06/2006]