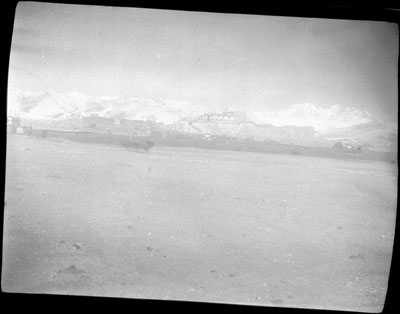 On March 6th 1927 A. J. Hopkinson left Yatung to travel to Gyantse via Gautsa and Phari. This image was taken en route. Mountains can be seen in the distance and Phari Dzong can be seen in the centre of the image. The photograph was taken from the Government Rest Hous. Hopkinson stayed in Phari for two nights at the Government Rest House. He travelled to Phari to collect the cars that the Political Officer, Colonel Bailey, had ordered should be put in place to travel to Gyantse. During his time in Phari on this occasion, Hopkinson was visited by the two local officials, the East and West Dzongpon, and he took them each for a five minute ride in the car [see Notes]

Notes on print/mount - One contact print made from this negative is contained in A. J. Hopkinson's negative case with the negative. The print appears to have been removed from an album, as there are traces of black mounting paper around the edges of the print as if it has been taken out after previously being glued in place. A partially decipherable caption has been written on the back in pencil: "PHARI JONG from Govt. Rest House". The number 15 has been written on the front top right corner in pencil. [MS 29/06/2006]