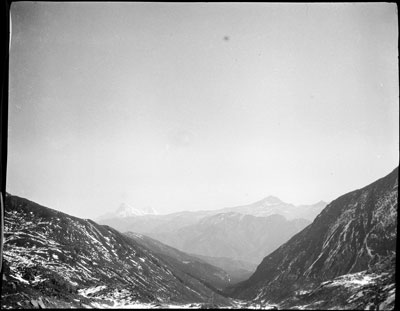 The top of the pass known as Natu La, which formed the crossing point from Sikkim into Tibet, with mount Chomolhari visible in the centre distance. In this photograph, which Hopkinson states was taken at 8.30 a.m., the sky is relative clear. However, it should be compared with BMH.B.12.1, taken just half an hour later, in which the snow clouds have rolled in so densely that the landscape is barely visible. This photograph was taken in very cold weather conditions using a tripod stand.

Notes on print/mount - One contact print made from this negative is contained in A. J. Hopkinson's negative case with the negative. The print appears to have been removed from an album, as there are traces of black mounting paper around the edges of the print as if it has been taken out after previously being glued in place. A partially decipherable caption has been written on the back in pencil: "[?] - Cho-mo-lha-ri in the distance - Bebry 8th 1927 - 8.30 am". 'H12' has also been written on the back in pencil, and the number '3' has been written on the front top right corner, also in pencil. [MS 29/06/2006]