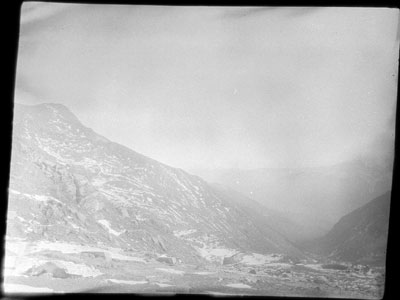 The top of the pass known as Natu La, which formed the crossing point from Sikkim into Tibet. In the centre distance, mount Chomolhari can just be seen. This photograph was taken in very cold weather conditions using a tripod stand

Notes on print/mount - One contact print made from this negative is contained in A. J. Hopkinson's negative case with the negative. The print appears to have been removed from an album, as there are traces of black mounting paper around the edges of the print as if it has been taken out after previously being glued in place. There is no caption but 'H12' has been written on the back in pencil. The number 5 has been written on the front top right corner in pencil. [MS 29/06/2006]

Other Information - Description: Hopkinson wrote in his journal for December 25th 1926, when he was travelling from Gangtok to take up his new post of British Trade Agent at Gyantse, that whilst travelling over the Natu La for the first time he saw Chomolhari in the distance: “I wanted to photo’ it, but it meant an exposure and getting out my camera stand, and my hands were nearly frozen off when I started to touch it. So I took a snap but I don’t expect it to come out” [A. J. Hopkinson Archive, OIOC British Library, Mss Eur D998/53, Letters mainly from Gyantse 1926-27, page 4] [MS 29/06/2006]

Other Information - Dates: This photograph was taken on the same occasion as BMH.12.1. This image is dated February 8th 1927. However, in Hopkinson's Diary he states that he travelled over the Natu La on February 9th 1927 and the image has been given this date as the more contemporary reference. For dating of image, see A. J. Hopkinson Archive, OIOC British Library, Mss Eur D998/53, Letters mainly from Gyantse 1926-27, undated diary entry, page A [MS 29/06/2006]