A cairn at the top of the Natu La 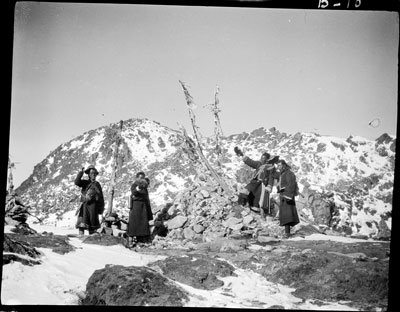 A cairn at the top of the pass known as Natu La which formed the crossing point from Sikkim into Tibet. Hopkinson refers to this site as 'Hlagya Cho' [Lhagye Lo]. The men in the photograph are all associated with the British Trade Agency in Tibet. From left to right they are: Hlakdun, one of Hopkinson's syce, Tami, his orderly, Pasang, his head chaprassi, and Tondup [unidentified role]. They are standing next to a large cairn with prayer flags erected by travellers over the pass