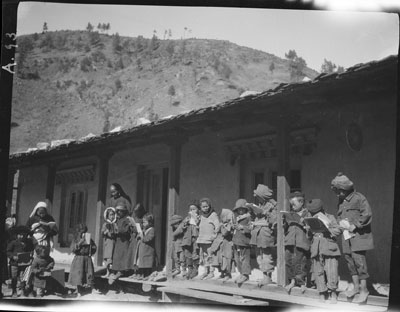 Schoolchildren at Yatung school in the Chumbi Valley. Many of the children were Nepalese and of Sikkimmese Lepcha origin. The headmistress, who was a Lepcha Christian, can be seen standing on the steps with the children as they read. This photograph may have been taken on December 26th 1926, when Hopkinson first arrived at Yatung, when the school was in fact closed for the holidays

Other Information - Description: [Extract from taped interview, Richard Blurton and Mrs Hopkinson] 'Same as 92 [BMH.A.92 - 'School at Yatung - pupils are Nepalese and Lepchas - the latter Sikkim natives - the girls in headscarves, for instance'] but including the school mistress who is a Lepcha. Lepcha language is remarkable for having a name for practically every variety of bird, animla and plant' [MS 20/04/2006]