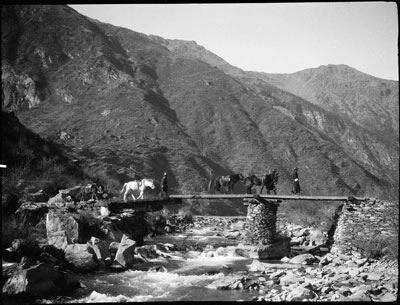 A bridge in the Chumbi Valley between Yatung and Dungkar, where Hopkinson visited at the end of January 1927. The man leading the horses across the bridge is Sonam Tobden, the Head Clerk at the British Trade Agency at Yatung. The white horse was Hopkinson's mount

Notes on print/mount - One contact print made from this negative is contained in A. J. Hopkinson's negative case with the negative. The print appears to have been removed from an album, as there are traces of black mounting paper around the edges of the print as if it has been taken out after previously being glued in place. A partially decipherable caption has been written on the back in pencil: "Crossing bridge from Donker Monastery - Sonam in front". The number 3 has been written on the front top right corner in pencil. [MS 26/06/2006]

Other Information - Description: [Extract from taped interview, Richard Blurton and Mrs Hopkinson] 'Chumbi Valley, leading away from Yatung towards Phari. The type of bridge seen in this photograph was no longer there when Mrs Hopkinson reached these parts in the 1940s. This type of bridge would probably have been swept away every winter. The cavalcade is lead by Rai Sahib Wangdi; the others are doubtless AJH's servants, one of whom was Tami' [MS 20/04/2006]