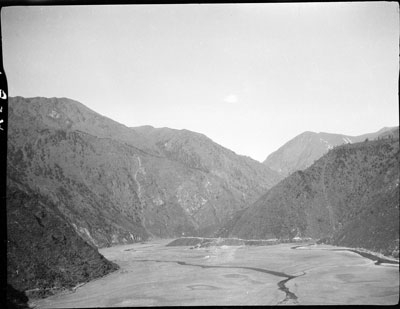 The plain of Lingmathang, as seen from near Dungkar Monastery, approximately 5-6 miles to the north of Yatung. The river can be seen coursing through the centre of the valley. Hopkinson visited Dungkar Monastery on January 30th 1927 and took this photograph en route

Notes on print/mount - Two contact prints made from this negative is contained in A. J. Hopkinson's negative case with the negative. The first print appears to have been removed from an album, as there are traces of black mounting paper around the edges of the print as if it has been taken out after previously being glued in place. A partially decipherable caption has been written on the back in pencil: "Lingmatang Plain 5 miles above Shasima - view from near Donker Monastery". The number 1 has been written on the front top right corner in pencil. The second print has the caption 'Lingmatang on the road to Lhasa' written in pencil on the back [MS 26/06/2006]

Other Information - Description: [Extract from taped interview, Richard Blurton and Mrs Hopkinson] 'The Ningma-tang plain in the route between Yatung and Phari. Very popular with AJH [Arthur Hopkinson] and frequently photographed by him. In the rains it became a small lake and you had to walk right round the edges hugging the valley sides; in the summer, however, it was dry and you could ride straight across the middle through a sea of golden grasses and rushes - a great relief after the rather barren road above. Beyond the valley was (?) Dongko monastery' [MS 20/04/2006]