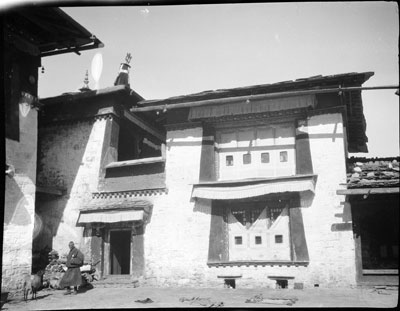 Dungkar Monastery, 6 miles to the north of Yatung. This is the house of the Abbot, the corner of which can be seen in BMH.A.85.1. Hopkinson visited this monastery on January 30th, by way of Galingka Village and the new home of the Yatung Oracle. A monk holding a prayer wheel can be seen in the bottom left of the image

Notes on print/mount - One contact print made from this negative is contained in A. J. Hopkinson's negative case with the negative. The print appears to have been removed from an album, as there are traces of black mounting paper around the edges of the print as if it has been taken out after previously being glued in place. A partially decipherable caption has been written on the back in pencil: "Donker Monastery - Abbot's House - NB Monk with prayer wheel". The number 2 has been written on the front top right corner in pencil. [MS 26/06/2006]