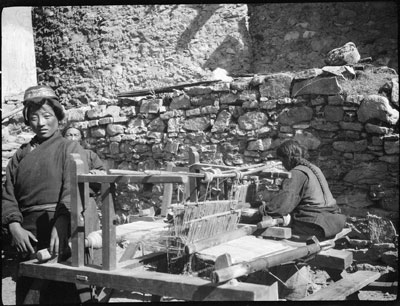 A woman weaving at a loom in the courtyard of a house in the village of Galingka in the Chumbi Valley. Another woman and a boy stand alongside, watching the photographer

Notes on print/mount - One contact print made from this negative is contained in A. J. Hopkinson's negative case with the negative. The print appears to have been removed from an album, as there are traces of black mounting paper around the edges of the print as if it has been taken out after previously being glued in place. A partially decipherable caption has been written on the back in pencil: "Woman weaving". The number 5 has been written on the front top right corner in pencil. [MS 26/06/2006]

Other Information - Description: [Extract from taped interview, Richard Blurton and Mrs Hopkinson] 'Weaving in Gyantse [sic] - note the looms used. The wool cloth was the heavy homespun which was used for clothing. This was sheep's wool; the yak's hair was spun into cloth which was hung as a curtain across the entry into monastery doors. It was black and shiny, rather like the horse-hair at one time used in Britain for upholstery' [MS 20/04/2006]