Yatung Oracle and his wife at home 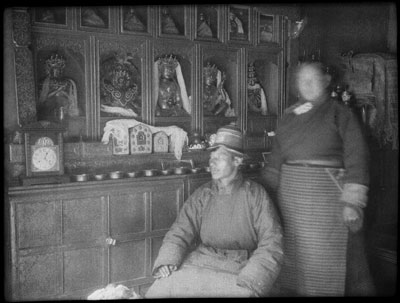 The Yatung Oracle and his wife inside their house at Galingka village. Slightly out of focus. An altar with images, butter lamps, khatak offering scarves and a clock can be seen in the background. The Yatung Oracle and his family outside his house in Galingka village. At the time Hopkinson visited and took this photograph at the end of January 1927, the Oracle was in the midst of a scandal, having taken a wife, and had set up home in the village in order to prevent causing further displeasure amongst the monks [A. J. Hopkinson Archive, OIOC British Library, Mss Eur D998/53, Letters mainly from Gyantse 1926-27, diary dated January 30th 1927, page A]

Other Information - Description: [Extract from taped interview, Richard Blurton and Mrs Hopkinson] '83 and 82 - The private chapel/reception room in the house of the oracle near Yatung. Note the icons, boxes, offerings - also a European clock, a hurricane lamp, a photograph and tea-pots as well as offering bowls containing water and gau . He must have served the local monasteries such as Kargyu (where they had a fine 1000-armed Avalokitesvara) and the monastery just past Ningma (or is it Lingma?) -tang [Lingmatang], the monastery where the Dalai Lama arrived at on his flight south from Lhasa in 1959' [MS 20/04/2006]