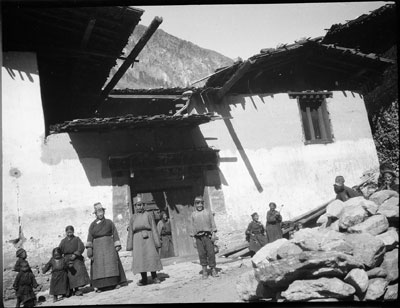 The Yatung Oracle and his family outside his house in Galingka village. At the time Hopkinson visited and took this photograph at the end of January 1927, the Oracle was in the midst of a scandal, having taken a wife, and had set up home in the village in order to prevent causing further displeasure amongst the monks [A. J. Hopkinson Archive, OIOC British Library, Mss Eur D998/53, Letters mainly from Gyantse 1926-27, diary dated January 30th 1927, page A]

Notes on print/mount - One contact print made from this negative is contained in A. J. Hopkinson's negative case with the negative. The print appears to have been removed from an album, as there are traces of black mounting paper around the edges of the print as if it has been taken out after previously being glued in place. A partially decipherable caption has been written on the back in pencil: "Choji (in centre) in front of his house". The number 7 has been written on the front top right corner in pencil. [MS 26/06/2006]

Other Information - Description: [Extract from taped interview, Richard Blurton and Mrs Hopkinson] 'The same [as 82: 'The oracle and his family outside their house'] - note the woman winding her thread with her mouth' [MS 20/04/2006]