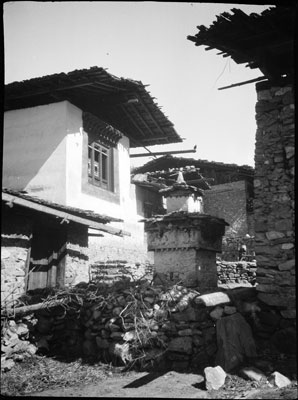 In Negative - There are two negatives for this image in the same pocket in Hopkinson's negative album, one of which is a copy of the other. 'A77' has been written on the top edges of the negatives in black ink. [MS 12/05/2006]

Notes on print/mount - Two contact prints made from this negative are contained in A. J. Hopkinson's negative case with two negatives, one of which appears to be a copy of the other. The first print appears to have been removed from an album, as there are traces of black mounting paper around the edges of the print as if it has been taken out after previously being glued in place. A partially decipherable caption has been written on the back in pencil: "Mani wall in foreground. Behind women weaving". The number 4 has been written on the front top right corner in pencil. The other print has the caption: "At Galingka. A typical Chumbi Valley house (the home of the 'Oracle')" [MS 26/06/2006]