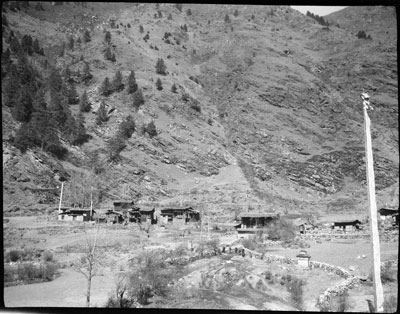 The village of Galingka in the Chumbi Valley. A prayer flag can be seen on the right hand side and a mani wall in the lower right of the image. People can be seen walking along the path leading into the village next to a stonework wall

Notes on print/mount - One contact print made from this negative is contained in A. J. Hopkinson's negative case with the negative. The print appears to have been removed from an album, as there are traces of black mounting paper around the edges of the print as if it has been taken out after previously being glued in place. A partially decipherable caption has been written on the back in pencil: "[?] Note mane wall and prayer flags". The number 7 has been written on the front top right corner in pencil. [MS 26/06/2006]

Other Information - Description: [Extract from taped interview, Richard Blurton and Mrs Hopkinson] 'The village of Gelingka in the Chumbi Valley - note the chorten and prayer flags. This type of house with a steep shingle roof (denoting plenty of rain) never appears on the Tibetan plateau, where they would be flat-roofed. You passed through this village as you went from Yatung to Phari' [MS 20/04/2006]