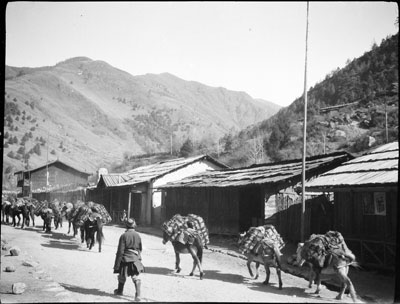 A group of traders with pack animals loaded with oranges being brought in from Sikkim, passing along a street in Yatung

Notes on print/mount - One contact print made from this negative is contained in A. J. Hopkinson's negative case with the negative. The print appears to have been removed from an album, as there are traces of black mounting paper around the edges of the print as if it has been taken out after previously being glued in place. A partially decipherable caption has been written on the back in pencil: "[?] Mules (carrying oranges from sikkim) passing through Shasima - agency flagstaff in [?]". The number 4 has been written on the front top right corner in pencil. [MS 26/06/2006]

Other Information - Description: [Extract from taped interview, Richard Blurton and Mrs Hopkinson] 'Mule train passing through Yatung - perhaps carrying firewood and wool (not carrying brick tea which was imported not from India, but from Russia, via China. It was, apparently made of tea dust held together with a small amount of gelatinous bullock blood). From the Trade Agent's house you could look down over the route and watch the caravans of mules or yaks passing down to Sikkim' [MS 20/04/2006]