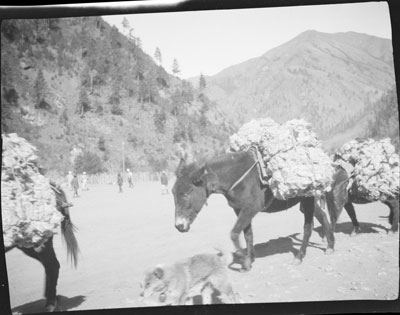 A group of mules carrying loads for trade with a dog accompanying them in the centre bottom of the image. Members of the Yatung Escort and Agency staff can be seen in the background on the football pitch that was regularly used by Hopkinson and his aides

Notes on print/mount - One contact print made from this negative is contained in A. J. Hopkinson's negative case with the negative. The print appears to have been removed from an album, as there are traces of black mounting paper around the edges of the print as if it has been taken out after previously being glued in place. A partially decipherable caption has been written on the back in pencil: "[??] mules - passing foo[tball] ground - Note Tibetan ma[stiff] which accompanies all traders". The number 3 has been written on the front top right corner in pencil. [MS 26/06/2006]

Other Information - Description: [Extract from taped interview, Richard Blurton and Mrs Hopkinson] '72 - mules carrying fleeces - note the mastiffs, which may have had both its ears and tails cropped to prevent them getting frost-bite' [MS 21/04/2006]