Man looking out over Yatung valley 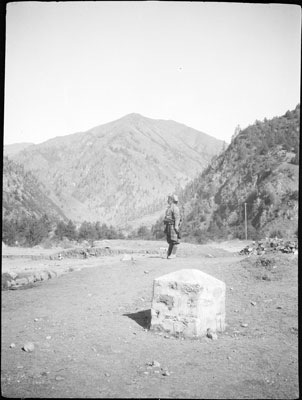 A man standing looking out over the Yatung valley with a small stone obelisk in the foreground. The photographer is looking north up the valley. A telegraph pole can be seen on the right hand side of the image. Hopkinson states that this photograph was taken from the tennis court on which he and the Agency staff would play regularly

Notes on print/mount - One contact print made from this negative is contained in A. J. Hopkinson's negative case with the negative. The print appears to have been removed from an album, as there are traces of black mounting paper around the edges of the print as if it has been taken out after previously being glued in place. A partially decipherable caption has been written on the back in pencil: "[??] (Taken from tennis ground Shasima lookinh N)". [MS 26/06/2006]

Other Information - Description: [Extract from taped interview, Richard Blurton and Mrs Hopkinson] 'Yatung - note the telegraph in the background which followed the Treaty Trade Route from Gangtok as far as Gyantse. The troops at Gyantse were there nominally to guard the Trade Route' [MS 21/04/2006]