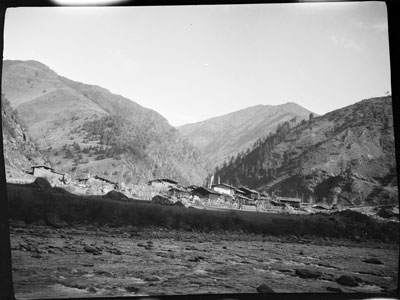 A view from below of Yatung Trade Mart in the Chumbi Valley. The distinctive pitch-roofed buildings, seen in the Chumbi Valley but not in central Tibet, can be seen on the ridge above. This photograph seems to have been taken during the early days of Hopkinson's tour of duty as Trade Agent, either on December 26th 1926 or between January 26th and February 8th 1927

Other Information - Description: [Extract from taped interview, Richard Blurton and Mrs Hopkinson] '46 - Yatung - with the river in the foreground' [MS 21/04/2006]