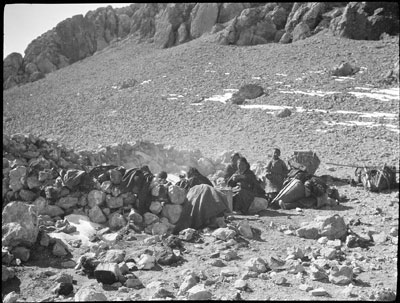 A group of Tibetan men, women on children on a hillside near Dochen. Dochen was en route from Gyantse to Yatung and this image may, therefore, have been taken between January 21st - 25th 1927 when Hopkinson left Gyantse for the first time to return to Yatung. The group is sitting in a stonework enclosure with the smoke from a fire visible in the centre of the image. Baskets can be seen on the right of the image and patches of snowfall can be seen on the hillside behind

In Negative - 'A36' has been written on the left edge of the negative in black ink. The negative has been machine perforated along the right side. 26 holes have been perforated in total [MS 12/05/2006]

Notes on print/mount - One contact print made from this negative is contained in A. J. Hopkinson's negative case with the negative. The print appears to have been removed from an album, as there are traces of black mounting paper around the edges of the print as if it has been taken out after previously being glued in place. A partially decipherable caption has been written on the back in pencil: "Tibetan nomads lunching - Tibetan nomads near Dochen Dzo". The number 27 has been written on the front top right corner in pencil. [MS 24/06/2006]

Other Information - Description: [Extract from taped interview, Richard Blurton and Mrs Hopkinson] '36 - Nomad encampment on the road between Phari and Gyantse. The child seen here by the basket is probably the same as in 40' [MS 21/04/2006]